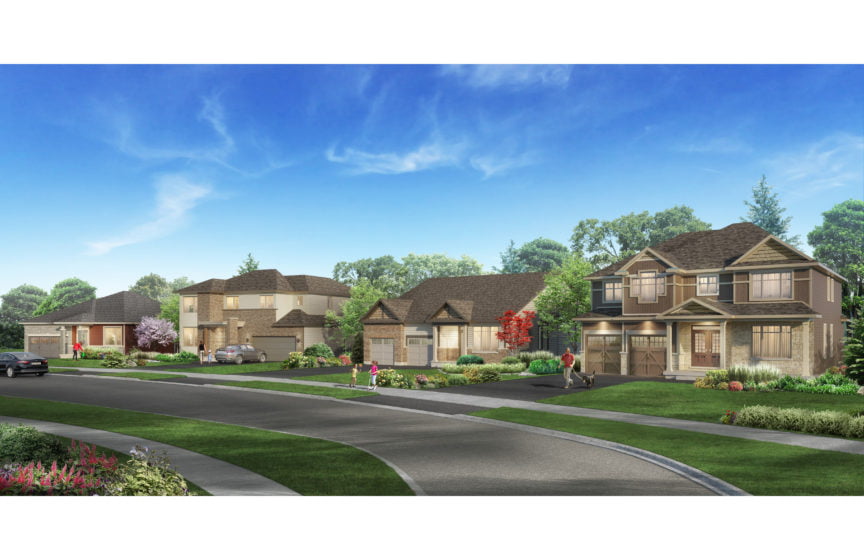 Thinking about Pathways in your Life

The choice keeps growing off Bank Street south of Leitrim Road as Richcraft becomes the ninth builder to launch sales in this popular south-end area.

Reuniting with fellow builders eQ Homes and Phoenix Homes, who launched in September, the trio presents Pathways at Findlay Creek. In some ways, it’s an extension of the Findlay Creek community pioneered by Tartan Homes and Tamarack Homes more than 15 years ago. Pathways is meant to flow seamlessly south of the Tartan/Tamarack project and both hug the Leitrim Wetland to the west.

But Pathways also aims to foster its own identity, working to create a sense of family and a connection to nature.

“We thought of taking it away from the physical pathways and thinking about the paths in your life,” says eQ marketing and brand manager Tobin Kardish. “The path to bringing your first child home, the path to retirement, because it is a community for all ages.”

And while it’s a new community, it can take advantage of the amenities that have developed over the years as the Findlay Creek area has grown, with plenty of schools, retail, services and recreation close at hand. And proposed for 2021 is the O Train Trillium Line extension to bring light rail transit to the area.

Kardish believes the area has become so popular because it’s closer to downtown than other suburban neighbourhoods and it’s an area that has reached critical mass.

“It’s taken its time over the years to develop, but it has developed and it has established a name for itself and people like the idea of being in that area. It’s a brand on its own, Findlay Creek.”

Yet it benefits from a country feel, says Rahul Kochar, Phoenix’s vice-president of operations. “There’s still this feeling that you’re right on the ridge of urban living and rural living … it still has a slightly less dense feeling to it.”

He also feels there’s still a sense of getting in on the ground floor when it comes to long-term value. “It hasn’t yet completely exploded and it’s going to.”

With so many builders to choose from, how do they stand apart from the competition?

“We all have our own element that we bring to the marketplace,” says Bellman. “The nice thing about mixing up with other builders is it gives a wider scope to product and overall look and vision to the streetscape.”

Set on 127 acres, there will eventually be some 900 homes at Pathways, ranging from towns and singles (both bungalow and two-storey) to condo flats, which will come later. Lots range from 31 to 50 feet and include basement walkouts and back splits. There will be three parks and an elementary school, all interconnected by extensive pathways.

The builders expect to open a model home row in the fall, showcasing a selection of singles and towns.

eQ is seeing a lot of interest from both first-time buyers and those looking not so much to downsize as they are to pull some equity out of their home, says Kardish. “They’re not old enough to go into a condo, they don’t want to go into a bungalow, but they want to cash down from their family home and move into something a little bit smaller, less maintenance.”

In the first phase, eQ offers 24 towns and 42 singles on lots from 35 to 50 feet wide, although not all have been released yet.

Phoenix started with both towns and singles, but its towns proved so popular that the builder is sold out in this phase, even selling off the townhomes that were earmarked as models. Kochar says the singles are now doing quite well.

Phoenix has 85 lots in the first phase: 22 towns and 63 single-family homes, including floor plans for its new Income Series, which offers a fully separate basement income suite with more than 1,000 square feet and an optional loft.

As the last builder to launch, just opening in February, Richcraft hasn’t seen as much activity yet as Phoenix and eQ, but has found a pent-up demand for the project that’s generating a lot of interest. Richcraft also has the majority of the townhomes available at Pathways (46 have been released in phase one), along with 61 singles on 31- to 44-foot lots in the first phase. Phase two will include 50-foot lots backing onto the wetland.

It was Richcraft’s towns that attracted Findlay Creek residents Ed and Joan Morgan.

“When we walked into (the Stillwater) show home model, we didn’t have to look any further. We knew that this was ‘the fit’ for our lifestyle and it felt like home immediately,” says Joan. The couple already knew they wanted to buy from Richcraft and had pre-registered with the builder.

“They offer fantastic selection of standard finishes so you don’t feel forced to upgrade to get the look you want.”

Currently renting in Findlay Creek after selling their Greely home a few years ago, Ed says the time was right to buy and they knew they wanted to stay in the community. “It’s convenient, it’s close to everything.”

Occupancy for all three builders is expected by early 2019.

What: A planned community of about 900 towns, singles and condo flats adjacent to Findlay Creek and the Leitrim Wetland. There will be about 258 lots released in the first phase. Condo flats have not been released yet.