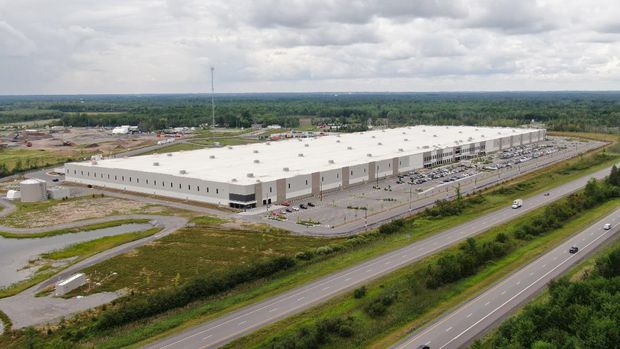 A 1-million-square-foot Amazon fulfillment centre, known as YOW1, opened last year in Ottawa. Another Amazon centre, which will be almost triple the size, will be constructed in the capital’s CitiGate Business Park.

Ottawa’s location is fast becoming recognized as an asset for distribution, with the 2019 opening of a massive Amazon fulfilment centre – the size of 60 hockey rinks – and a second, three-times-larger Amazon project set for 2021.

According to CBRE Group Inc., there are nearly 20 million people within a 400-kilometre radius of Ottawa – compared with 10 million for Montreal and 15 million for Toronto – including mid-size U.S. cities such as Syracuse, N.Y., and Burlington, Vt.

Shawn Hamilton, senior vice-president of CBRE Ottawa, says other large Fortune 500 companies “are circling the wagon,” considering Ottawa for a number of other reasons, including land availability and a growing tech sector.

“We’re at the tip of the iceberg,” Mr. Hamilton says. “Our main challenge as a city is to make sure that we’ve got land to accommodate these types of developments.”

Earlier this year, the city tabled its Official Plan, agreeing to make more land available to the downtown area. Farther out, there are already some well-positioned parcels within good proximity to the 400-series highways that are prime for development, Mr. Hamilton says.

The second centre, also a Broccolini project, the company’s fourth partnership with Amazon, will be located within the 170-acre CitiGate Business Park in Barrhaven (approximately 20 minutes from Ottawa’s downtown).

The five-level industrial building, the largest in the city, will span 2.7 million square feet and for now, Amazon’s footprint will take up 450,000 square feet.

James Beach, director of real estate development for Broccolini in Ottawa, says there is no conversation about another tenant coming into the facility – leading industry experts to believe Amazon will eventually take up the whole building.

When complete, it will increase Ottawa’s industrial inventory by 7.9 per cent, a significant boost for a city that, according to CBRE research, has the oldest industrial supply in Canada to date because of the lack of construction growth.

Only two business parks have been built in the past 20 years – CitiGate and Kanata West Business Park – and they are primed for modernization.

The arrival of the new Amazon business, combined with the lack of available industrial space, has pushed up commercial rental rents, now sitting at double digits per square foot, Mr. Beach says.

CBRE stats show that the average size of an industrial building in Ottawa is 40,000 square feet, compared with 500,000 square feet of new construction in the Greater Toronto Area.

Amazon’s Sumegha Kumar, director of Canadian customer fulfilment operations, is overseeing the country’s newest robotics centre. There are several factors it considers, she says, when deciding where to set up shop, such as how quickly it can offer products to the customer base and whether it can employ a large, talented work force. The new business is expected to create 1,000 jobs, she says, many of them high-level.

According to Mr. Hamilton, Ottawa is in a good position to attract such tech-driven A-List companies in need of highly skilled employees. In mid-July, the CBRE’s annual list of the top tech talent markets in North America named the capital as having one of the fastest growing tech sectors, up five spots from last year to No. 14.

“There is a need for talent in engineering and tech, since [the distribution centres] are a performing piece of precision enterprise,” Mr. Hamilton says. “Ottawa has a good talent base to support that.”

Apart from land costs and talent, the single largest cost for distributors is transportation – five times higher, on average, than the cost of real estate.

Amazon is also launching five new delivery stations in Ontario in Whitby, Scarborough, Brampton, Oakville and Cambridge by the end of 2020, in addition to the building it’s launching in Ottawa in 2021.

Amazon is no stranger to taking up massive real estate, Mr. Hamilton says. Its proposed 1.1 million square feet of leased downtown office space in Vancouver, for example, will make it that city’s largest corporate tenant.

But since Vancouver was already a major destination for international companies, the decision by Amazon to choose Ottawa – twice – is a sign of positive economic and development impact, he adds.

With companies increasingly focusing on customer-base bubbles versus who lives near a particular city, a radial perspective versus a linear one, “the conventional wisdom of distribution has been changing quite significantly in the last 10 years,” Mr. Hamilton says.

“It’s becoming more efficient and centralized,” he explains. “The industrial shipping model has grown to a level where Ottawa’s geography now makes more sense than it ever has before.”