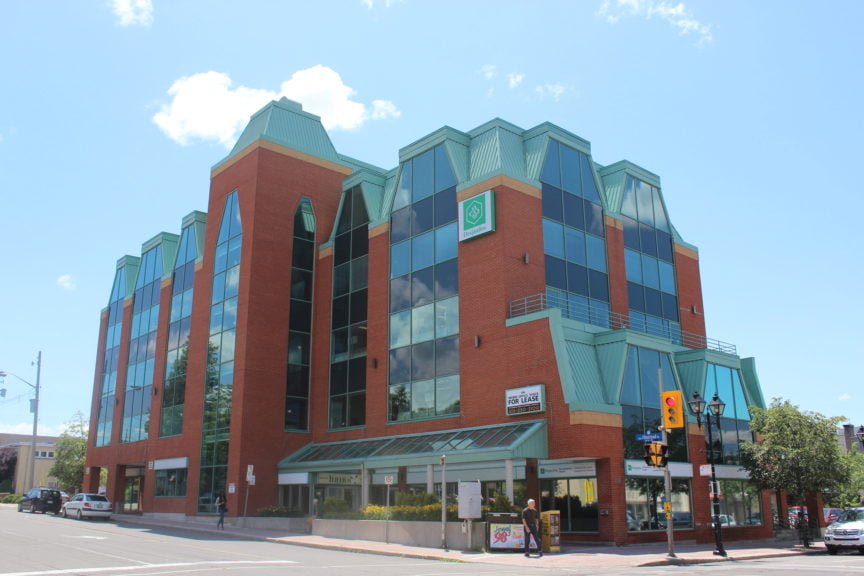 The East Ottawa neighbourhood of Vanier is not often associated with the word “trendy.” However, the Regional Group of Companies is among a group of developers who see signs of promise in one of the National Capital’s most downtrodden districts.

Sender Gordon, Regional’s director of investment and leasing, isn’t saying much about its plans for the sites. Regional sees positive change in the wind, though, and wants to help make it happen.

“We are really focused not just on results, but also on impact,” he says. “What are we going to do differently than any other developer? Making money is making money, but there is more to it than that.

“For us, value-add opportunity is our driver. How can we get involved in something that is going to be different tomorrow . . .” and, help change a community.

Hence the investments along with a three-block section of Montreal Road.
It first purchased and revitalized a five-storey 45,000-square-foot office building at 214 Montreal Rd., in 2015. In the past two years, it has also bought 234, 240 and 250 Montreal Rd., as well as the modern, six-storey Peter G. Smith office complex at 282-290 Dupuis St.

“The rest of the block is pending,” Gordon says.

There are several properties it still wants to buy, some decrepit and crumbling, but Regional is patient. “It’s a great spot and it’s just a matter of seeing it through.”

There are challenges ahead, though.

The Ottawa East district holds less than 10 percent of the city’s office inventory, but vacancy sits at a record-high 21 percent (as of mid-2017). Regional is not immune; its website lists numerous openings in the properties – including about 35,000 square feet at 282 Dupuis, plus 21,000 square feet at 214 Montreal Rd.

The Salvation Army also recently received city approval to construct a $50-million outreach centre and emergency shelter for a variety of its programs. Vanier residents and businesses fought the project – fearing in part it will hamper efforts to rejuvenate the area – but pending appeals processes, it will go ahead.

“The positive spin on the whole Salvation Army is that the community has come together and they’ve had one voice,” says Gordon, who closely followed the approval process. “What shocked me when they were having hearings, at planning board, was the amount of people that came forward just to share their opinions.

“That itself is a sign of a community that wants change.”

As a fourth-generation, family-owned and local business, Regional can operate a bit differently than many developers.

“We are able to look at greater risk, higher return,” says Gordon, whose great-grandfather started the business which has morphed, over more than 60 years, into today’s Regional Group. Regional believes Vanier is worth the risks because, despite the challenges, change is happening.

* annual population growth of about 2.5 percent;
* annual income increases of about 2.6 percent among residents;
* the influx is concentrated in the 20-50 age demographic, many of them young families;
* 400 housing units (mainly condos) under construction along nearby Beechwood Avenue, with about 1,000 more in the pipeline.

“If you think of one percent being a healthy growth in population, we are far ahead of that,” Gordon says. “It’s young families that are having their first child, they are living in their condo downtown or their apartment downtown and they really want to buy a home, but they are so used to the culture of living in an urban environment, they don’t want to buy a house in (suburban) Kanata . . .

What would drive that change further forward?

“Is a residential (building) going to change the area today? Probably not,” Gordon says. “But if more people are moving there for work, that means the street is going to have to change; the retail, the services that are needed for those (people) that are going to be there throughout the day.”

That means mixed-use development — some combination of residential, office and ground-floor retail to “animate” new buildings and create foot traffic.

There is a precedent for this type of change in Ottawa, just a few kilometres away on the western edge of the downtown. And Regional was involved.

A development boom has lifted the Westboro and Hintonburg neighbourhoods from crumbling to coveted. As an early driver of that rejuvenation, Regional enticed high-end outdoors retailer Mountain Equipment Co-Op into a street-front retail property at 366 Richmond Rd.

“That was really a kick-starter for that area and we really pride ourselves on those types of opportunities,” Gordon says. “I think Mountain Equipment Co-op made a statement. I think the activity they brought to the area, it became a destination-type location.

“So people who wouldn’t be going to the area anyway are now coming and that really changed the neighbourhood.”

With Ottawa’s new light rail transit line about to open in those neighbourhoods this year, Westboro and Hintonburg are thriving. Regional is banking on similar results in Vanier.

“If you actually look up from the bridge down Montreal Road, we are not the only developer in the area. Other developers are already coming. It’s a positive sign.”

Other developers in Vanier

They include Ottawa-based Domicile and Longwood Building Corporation, who both have major residential projects on the go.

Montreal Road is not on Ottawa’s new LRT, but the city has committed to rebuilding it with bicycle and bus lanes – including an express route to a nearby LRT station, the downtown office/entertainment district and Parliamentary Precinct.

“The difference in the quality of tenants that came through two years ago as opposed to coming through today, it’s astonishing. Whereas we had all of the pawn shops knocking on our door to rent retail space, it’s just different groups that are coming through.

“We’re really starting to see some good activity.”
Banks, investment firms and non-profit agencies are among the tenants Regional has signed.

“At what point do we say success has happened? I would say it already has,” Gordon says. “People are already starting to move in, you are starting already to see a different demographic on the street.”