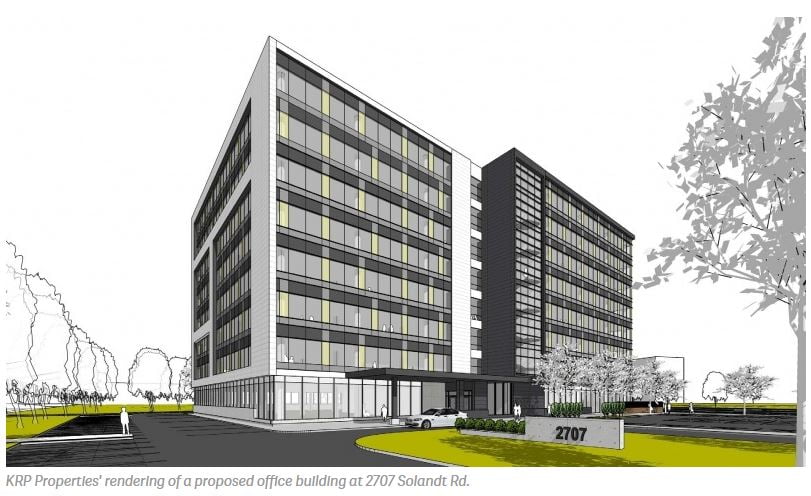 With many Kanata office buildings practically bursting at the seams thanks to a red-hot tech sector, two of the city’s biggest property owners are laying the groundwork for major new builds in the west end.

KRP Properties and the Regional Group are both devising plans for new office towers on a stretch of Solandt Road just northeast of March Road near the Brookstreet Hotel. The properties are located in the epicentre of the Kanata North tech park, which boasts more than 500 companies ​– many of them fast-growing firms with a thirst for more space in which to expand their footprints.

As a result, the commercial vacancy rate in the area has plummeted to around six to seven per cent, levels not seen since the halcyon days of Ottawa’s original dot-com boom of the late 1990s and early 2000s.

“We’re seeing a tightening in the market,” says Sender Gordon of the Regional Group, which has drafted a design for a seven-storey, 143,000-square-foot, class-A building at 2700 Solandt Rd. “The market is finally at a point that we can absorb new buildings.”

Regional has yet to file any official plans for the site. Gordon, the firm’s director of investment and commercial leasing, says Regional is looking for the “right partner” to pre-lease space before moving ahead with its plans.

The current proposal on the firm’s website isn’t set in stone, he adds, noting the final concept could end up featuring multiple smaller buildings if that type of layout better suits tenants’ needs.

“Flexibility is key in today’s market,” he says. “We’re not building on spec.”

KRP looks to build down the road

“There’s a lot of tenants out there right now,” he says. “We’re not seeing a slowdown. We’re anticipating that some of the larger users who have outgrown their space are going to be looking for (other places to lease).”

KRP has filed a development application with the city for an eight-storey, 200,000-square-foot class-A office building at 2707 Solandt Rd. on a plot of vacant land just south of the Marshes Golf Club.

“It’s in the heart of where we have most of our development around the Brookstreet Hotel,” says Vandewouw, noting the site has easy access to both March Road and Legget Drive. “It’s kind of a natural fit.”

While the property management firm has yet to sign any tenants, Vandewouw says KRP wants to be “shovel ready” once it’s pre-leased about 50 per cent of the space ​– something he predicts could happen as soon as next spring.

“I don’t think that tech companies can afford the lead time that sometimes is required in order for a building to come on-stream,” he says, explaining it can often take up to nine months to go through all the necessary approvals to break ground on a new office tower. “So we’re just trying to shorten that time (frame).”​

KRP’s current portfolio includes 34 buildings in Kanata covering a total of about 3.2 million square feet, mostly on Legget Drive, March Road and Terry Fox Drive and much of it constructed during the previous tech boom two decades ago. Those buildings are now 95 per cent occupied, Vandewouw says, leaving the landlord with little room to manoeuvre when burgeoning tech tenants ask for more space for their expanding workforces.

About 80 per cent of KRP’s leasing activity in the past couple of years has been with existing tenants looking for more room to grow, and Vandewouw says it’s becoming more and more of a challenge to accommodate them.

“Once you get down to about five per cent vacancy, it becomes a little bit more difficult because you can’t move pieces around,” he explains. “That’s driving us to look at this.”

Still, Gordon and Vandewouw aren’t complaining. They say the current space crunch is just another sign of a local economy that’s continuing to churn out new jobs at a healthy clip.

“We’re at a time in Ottawa right now that everything is positive,” says Gordon. “Everyone is just firing on all cylinders.”

The federal Liberals’ recent return to power has provided a bit of reassurance to federal public servants whose spending plays a big role in fuelling local growth, Vandewouw adds.

“These are exciting times,” he says. “We don’t expect to see any kind of a downsizing of the federal government any time soon. And at the same time, you’ve got a vibrant tech sector in Ottawa, both downtown and in the west end, that gets a lot of press.”