Heritage Buildings – Thinking Outside the Box for a “Win-Win” 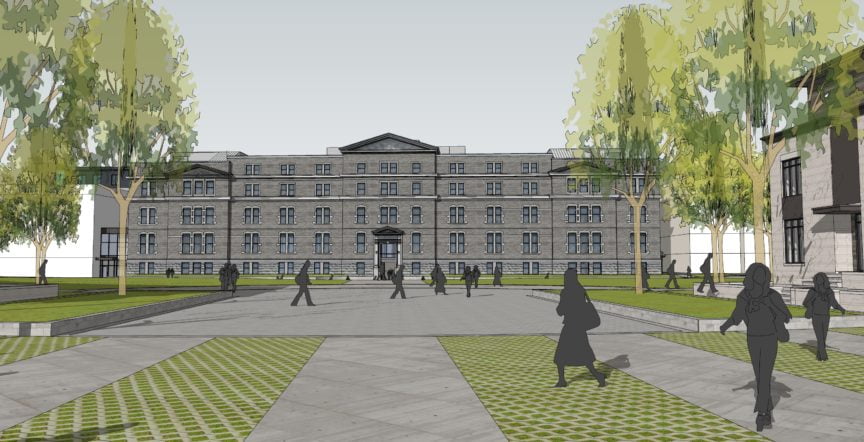 Thinking outside the box for a “Win-Win”

What do you do when you are faced with repurposing a 100-year-old heritage building? You put on your creative hat and work with the community, the City, and stakeholders, to come up with a winning solution that benefits the whole.

When Regional Group purchased the 26 acres along Main Street formerly owned by the Fathers of the Oblate Order, the centerpiece of the community was the heritage Edifice Deschâtelets Scholasticate Monastery.  This impressive limestone building was home, workplace, religious centre, and a literal cornerstone for the day-to-day lives of the Fathers for over 100 years.

As part of the master plan for Regional Group’s Greystone Village, the Deschâtelets would anchor the new community of 950 homes, public park space, and mixed-use development.  In fact, it became the focal point of the design – connecting a series of pedestrian-friendly roads, the Grande Allée, and new park spaces.

How do you do it?

You start by thinking about areas of greatest need for the community.  It was important for both the project and community alike that the building was not only restored but that it be multi-functional, offering housing and community services.

One such need was from the local Catholic school district, Conseil des écoles catholiques du Centre-Est (CECCE).  The school had a pressing demand for expansion and liked the idea of restoring a French landmark.

A second was a new community centre and a full-sized gymnasium.

The third and final use was to plan for senior affordable housing, a residential sector underserved in the community.

Regional worked closely with the City heritage staff on the plan to restore the Edifice, including removal of old systems and hazards within the 100-year-old monastery. An exhaustive effort to salvage the 1950’s-era chapel wing determined that it could not be practically repurposed and needed to be removed.

Therefore, the ownership decided to reallocate land and forego the scheduled development of residential condominiums in favour of constructing a gymnasium annex.

As of September 2020, Regional Group received council approval to rezone the property to include school use. This rezoning was the missing piece of the puzzle needed to finalize the deal with the CECCE.

On October 27, 2020, the CECCE received $5.7 million from the province of Ontario. This funding facilitated the purchase of the Deschâtelets building, soon to be the site of the new École élémentaire Catholique au coeur d’Ottawa.

Now remediation and repurposing efforts are well underway to usher in a new era of service and life for this historical and much-beloved community landmark.

As a fraternity focused on community, I am certain the former stewards of the land would approve.