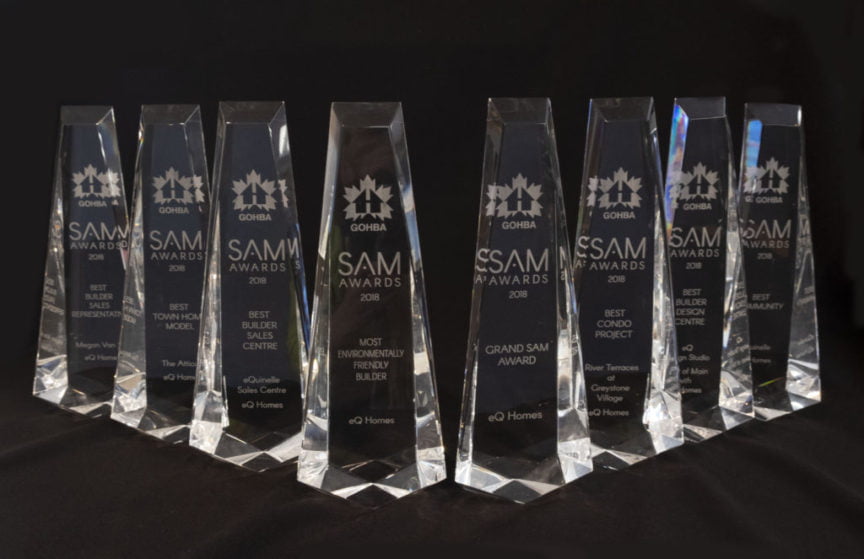 Builder eQ Homes has been piling up the accolades this fall.

Fresh off big wins at the Housing Design Awards in October, where the company was named production builder of the year and its Greystone Village development won for the best planned new community, eQ has now scooped up the most trophies at the Greater Ottawa Home Builders’ Association’s sales and marketing awards, called the SAMs.

eQ’s seven trophies handed out at an awards luncheon Tuesday at the Infinity Convention Centre earned the builder an eighth award: the Grand SAM for the most wins.

“A great effort by a great team shows off. I couldn’t be prouder of our team,” said eQ marketing and brand manager Tobin Kardish. “As we’ve grown as a company, so have our talents as a company and it’s starting to show.”

The trophies were awarded for a mix of categories, from model homes to sales representatives to its design centre. And that winning Greystone Village project? It picked up another trophy, this time for best condo project for its River Terraces building, while eQ’s well-established golf-course development of eQuinelle in Kemptville captured the award for best community.

“So much effort and time and care have gone into creating (eQuinelle),” said Kardish. “It reflects on a fabulous year we’ve had there. Sales have been great and it’s nice to be recognized by our peers. It truly has become a one-of-a-kind community.”

“They had a real designer approach,” said judge Karen Kavanagh, an advertising professor at Algonquin College.

In the five model home categories, Richcraft was the only builder to capture more than one award, winning for two of its single-family models and showing how drama and being bold with colour and pattern can pay off. 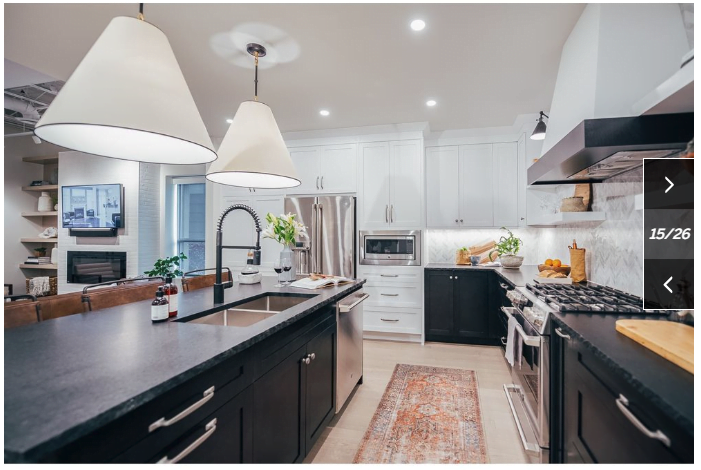 Its Beechside single, for instance, featured rich blue walls paired with crisp white cabinets in the kitchen for a fresh and vibrant look, while its Cedarbreeze single opted for a new take on timeless elegance with a wonderfully moody master bedroom treatment and eye-popping black-and-white ensuite in geometric tile.

“Graphic prints, that’s a big trend, but some people are very scared of it, so I thought it was interesting that a lot of them took the risk and just did it to give themselves an edge,” said returning judge and designer Jen Robinson of Jen Robinson Designs, referring to the Richcraft model and others.

She also noticed the use of bold light fixtures and mid-century modern furniture, as well as wallpaper popping up in almost all of the 15 models entered.

The constant challenge in model homes is in balancing the need to appeal to the masses — hence the typical emphasis on neutrals to make it easier for buyers to picture themselves living in the home — with the need to stand out from the crowd and create a home that’s memorable.

“That’s the hard thing,” said Robinson. “That’s where I think those light fixtures come in and the wallpaper; the things you can change but that make that model kind of stand out.”

While the model homes are the attention grabbers, there’s a lot to be said for the supporting cast of sales staff and marketing materials.

“Sometimes you forget all the moving parts,” noted judge A.J. Plant of Exit Realty Eastern Ontario. “There’s people behind the scenes.” Plant judged the seven sales achievement categories and while he found there was one that stood out in each category, he “would have hired all of them.”

Because buying a home is not a quick sale, successful sales staff need to be good at building and maintaining relationships, added Brian Jeffrey of the housing information website All Things Home, who also judged the sales staff categories.

“A lot of the people we talked with, that was something that came out: They go the extra mile, they meet people off hours, they work hard at establishing and building a relationship with the new homeowners.”

And as for the marketing material, Kavanagh noted: “Every year I think it gets better in terms of the cohesiveness of the campaign… (Companies are) really also getting to know their target audience and it’s showing in the materials.”

The awards, which were hosted by the housing association, recognized 40 builders, renovators and supporting companies in 36 categories.

Here are all the winners