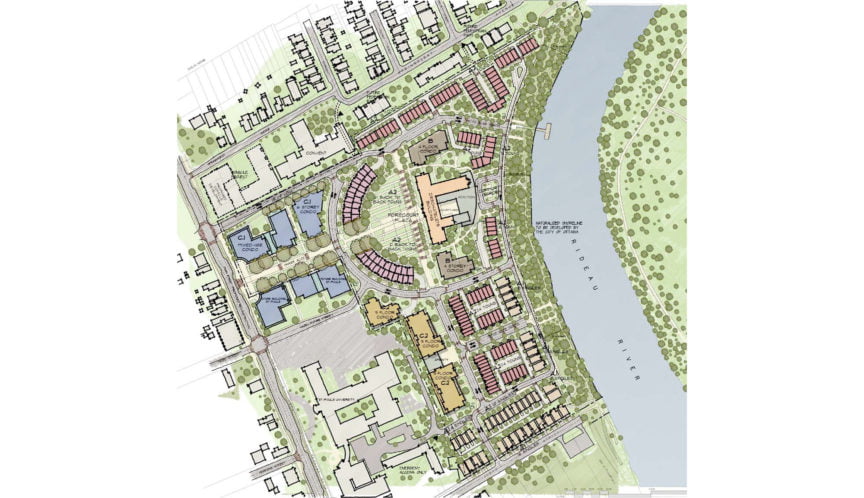 A rendering of The Regional Group’s vision for its 900-home Greystone Village development on former Oblates land in Old Ottawa East. The city of Ottawa’s planning committee granted re-zoning approval for the project Nov. 24, 2015. (courtesy of The Regional Group and Barry Hobin Architects)

The city of Ottawa’s planning committee has given zoning approval to a 916-home development covering nearly 11 hectares of prime real estate along the Rideau River.

The Regional Group plans to build its Greystone Village development on land that was owned by the Missionary Oblates of Mary Immaculate for over a century. The developer has laid out a plan for low and mid-rise homes, a park, commercial space and a multi-use pathway.

The Deschâtelets building, which dates back to 1885, would be also be preserved.

“There was no doubt community anxiety about what would become of the Oblates property, such a large parcel of land in such an important part of Old Ottawa East,” said Coun. Jan Harder, who chairs Ottawa’s planning committee.

She commended residents, city planners, the developer and the area’s councillor for providing an “exceptional example” of people working together.

Steven Pope of the Old Ottawa Community Association confirmed the “happy comments” about everybody working together. He’s said he’s pleased the zoning amendment “shrink-wraps” the height of the buildings, and feels certain they will look like they do in the developer’s drawings.